I have been such a trudger this week, feel like I've been moving in slow motion. I think the 3 round trips a day to school, and the cold drizzle (turning to dumping downpours) probably haven't helped.
Fortunately, this week's Cinema Saturday pick addresses trudging with much humor: 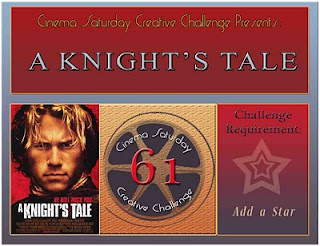 This is such a fun movie starring the late and much missed Heath Ledger. I was able to pull off a couple projects for this one -I had soooo much inspiration it was a challenge to pare it down. I love the quippy quotes, the rockin' soundtrack, the fabulous actors, and the story of a young man who was able to "change his stars" to live the life he and his father had always dreamed of for him.

This first project is a goofy one, and will be gifted to my dear sister-in-law who loves Heath, A Knight's Tale, and all that is quirky. I made it with my favorite scene as inspiration -At the beginning of the film with our hero's first appearance at a tournament, we see a medieval style arena/stadium, with Queen playing: "We Will Rock You". The crowd is 'stomp-stomp-clap'ing, The Wave is going around, there are face-painters in the crowd, girls are dancing. It always makes me want to head for a game, any game -Love it!! The soundtrack rocks, as does this paperweight project: 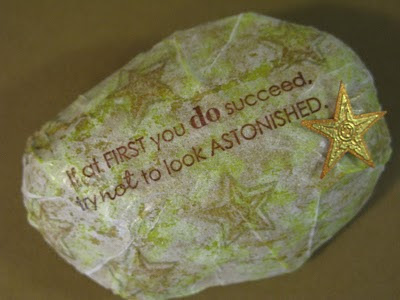 I love the quote on this...It reminded me of the "good guys" each time they pulled off a tournament.