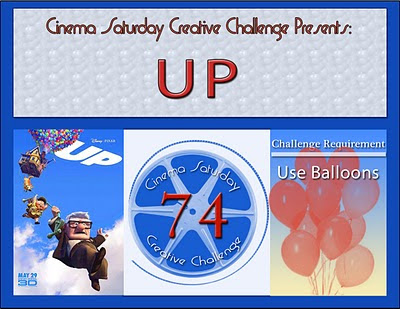 I have been waiting for this movie to show up at Cinema Saturday! It is such a wonderful film, so well-deserving of it's recent Academy Award. This movie will make you laugh, cry, and think. At the end of it you will just want to hug everyone near you (especially your dog!). If you have not yet seen this film, you simply MUST! I was inspired mostly by the main characters Carl, Russell, and Dug, and their new and developing relationships. I found the sentiment in my Full of Life set (how appropriate), and thought it represented Carl's new relationships perfectly. I also incorporated the sky, the house, and of course a dog -all fixtures in the film -as well as the required balloons, which I colored with marker directly on the paper to give a feeling of transparency, then with a Versamarker, clear embossed them. I did make this into a baby card, because I don't have a "Carl" in my life to give such a specific card to. :) 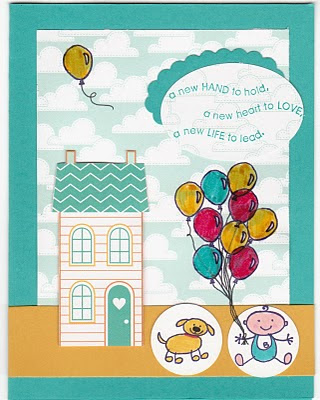 Then, because this is such a family favorite, my kids totally jumped on board, and wanted to play too.
They love the film!
This first one is my daughter's card. It was very important to her to have the main characters as well as the biggest cluster of balloons she could manage. Btw, she stamped and colored these, then cut and glued them all individually -much more patience than I!! She also hand drew a porch that was cut and glued on, so the characters would have somewhere to stand up in the sky. 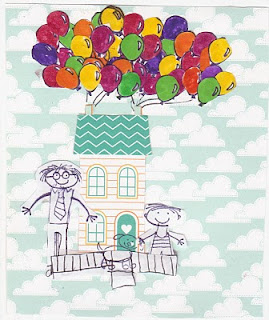 Here is my son's card. He likes things to be relatively "true to life", but with some silly twist. Here his silly twist is "Dug" on top of the balloons. He's also got someone looking out of one of the windows.
I am so glad they played with me, we had fun!! 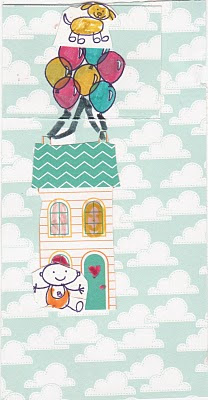