Happy Fall to you all!
It certainly looks like fall in the PNW -gray and very, very wet! :)

Well, saw some great sketch challenges this week, one of which is Mojo Monday's.
I'll try and get another posted before the week is done, but no promises -it's a crazy week!

Here is their sketch:

And here is my interpretation: 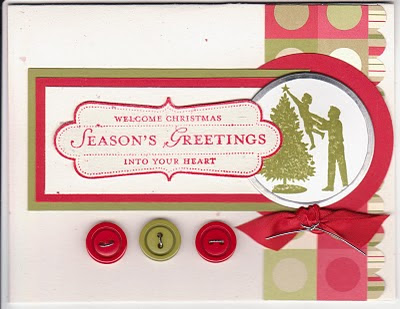 Everything is current, with exception of the fabulous and long retired "Dashing" DSP. The colors are Old Olive, Real Red, and Confetti White with Bold Bright Buttons and Silver elastic cord.

Have a great afternoon!
Posted by Nancy K at 12:21 PM 2 comments: Links to this post

Do you ever feel like you should have a super-hero title? I think many moms feel this at least once in their life, if not once a week (day??). And, boy, maybe we should...sometimes I think that I'm more like "The Greatest American Hero", not quite the perfect super-hero, but has a good heart, more "behind-the-scenes", and not always very graceful! :)
Today, I'm feeling more like Iron Man: flying from place to place, getting the job done completely and efficiently...hmmm...that sounds suspiciously like Pepper Potts too!
Thanks to Brooke and Sankari at Cinema Saturday for this Superhero inspiration with their feature this week: 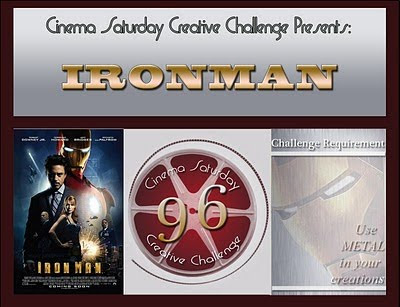 I was so excited to have an action flick -LOVE THEM!! Especially Iron Man -it's one of my favorites!
My sweet boy was excited too -he wants to be an inventor like Tony Stark someday, and is always using his ginormous imaginations to come up with some kind of machine, building, etc.
Knowing that I've got a crazy week ahead (pull out super-mom cape), I did not want to miss this week, and got right on it.
There were so many things I could have pulled from this film, but I settled on just a couple: The classic Iron Man colors -Cherry Cobbler and More Mustard, who knew! I also added some silver/pewter to pay homage to Tony's original Iron Man "outfit". The other I used was his heart, both his human and his machine hearts. Tony's character grew up so much -he went from playboy philanthropist, to country hero with a pretty good set of priorities.When I found out the challenge, I immediately remembered this stamp I had (I use it pretty regularly): "It takes courage to grow up and become who you really are", I feel like this is both representative of the Tony Stark character, and the actor who portrays him: Robert Downey Jr, who has had some very public rough times in life, and somehow always finds the courage to pick himself up and be better than he was.
Here is my card: 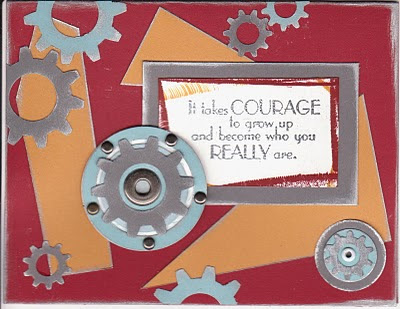 And...here is my little guy's card. He was inspired by the music in the movie (he wrote out the lyrics we sing along to one of the tunes, and colored a music note), and of course the imagination of Tony Stark to create the Iron man suit (drawn flying through the blue sky). 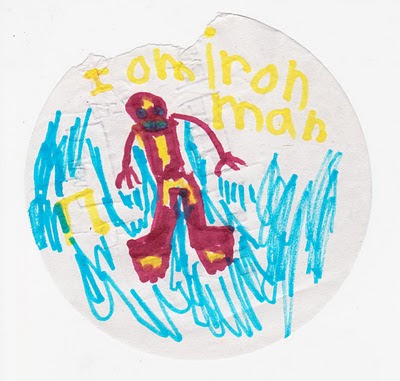 Thanks for stopping by!
Posted by Nancy K at 11:53 AM 6 comments: Links to this post

Can you feel it?
Fall is in the air: Halloween decor is appearing everywhere, and the leaves are starting to turn!
The Cinema Sisters are feeling it over at Cinema Saturday with this film: 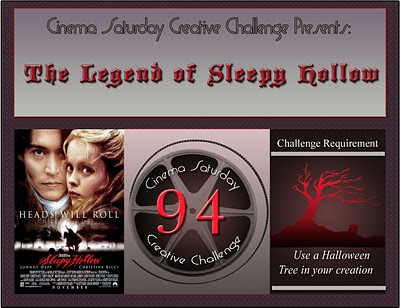 Ah, the fabulous team of Tim Burton and Johnny Depp; So many films together in recent years, that after watching Beetlejuice the other day, I felt something was missing. Then I realized with a laugh, there was no Johnny Depp.
So, for this challenge, along with inspiration from the film, we are to use a Halloween (aka "spooky") tree.
I totally forgot I had a wheel full of Halloween trees, but I unearthed it, as it is perfect for this challenge, and I also used some color inspiration from the film. Tim Burton films always strike me as "dark", some more than others (including Sleepy Hollow), but he has such great use of color. In Sleepy Hollow, as well as a few other of Burton's films, I love the splashes of warm colors he uses, red especially stands out, so I wanted to use the "dark" tree images, with a warm colored background. This is how I image Sleepy Hollow would look as the sun comes up on an autumn morning: 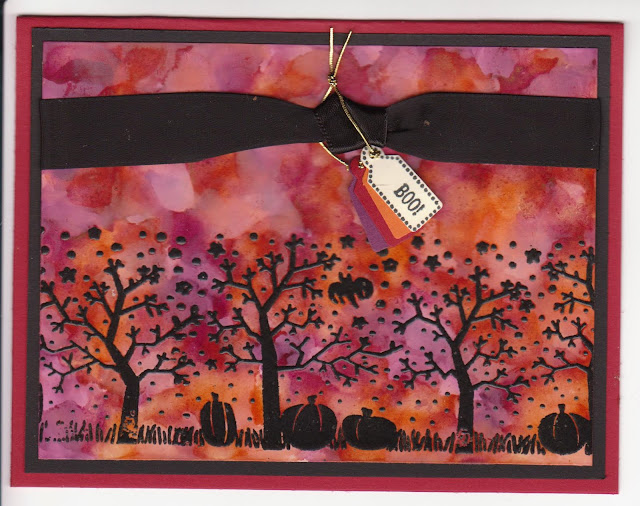 
What a fun way to celebrate such a creative and inspirational person!
Your projects and positive attitude are always amazing!
Here's to a fabulous birthday Sankari -may you get the royal treatment that you deserve!! 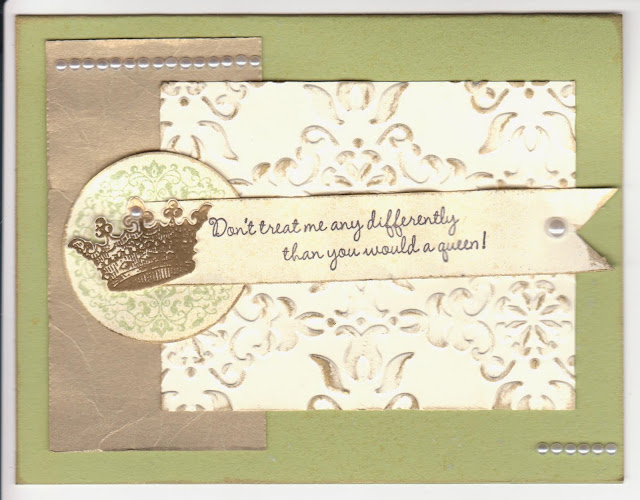 Join me in wishing Sankari a Happy Birthday over at her blog and/or at Cinema Saturday!
Happy Sunny Day!
Posted by Nancy K at 1:55 PM 1 comment: Links to this post

...NOT!! This week over at Cinema Saturday they are featuring the popular musical: 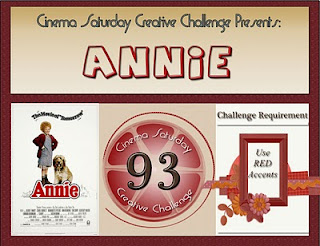 This really wasn't a movie I liked until recently. It always made me feel sad, although, I should have felt happy that I wasn't one of Miss. Hannigan's orphans! I guess I just felt bad for the girls, and sad that Annie couldn't find her parents. My daughter recently viewed this with a friend at a sleepover, and loved it! So, I watched with her and her brother, and we've had the songs stuck in our head since. Of course, my kids sympathize with the girls doing their chores (boy, they do not like to do housework!), and especially love the number, "It's a Hard Knock Life". So my project is an update to our old chore chart, in honor of my poor children and their "hard-knock life" (not!).
Enjoy!! 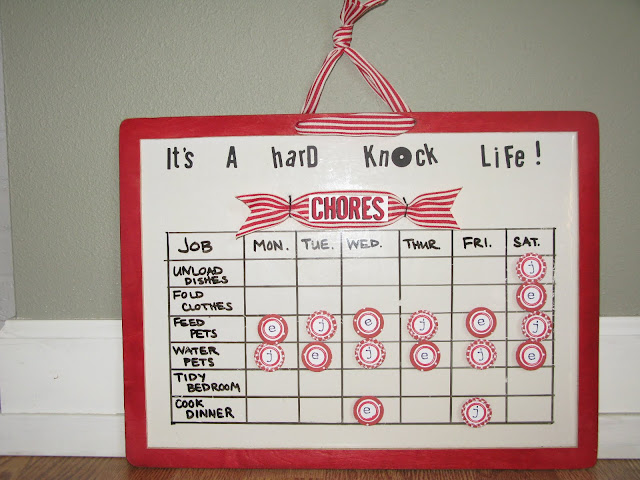