One Down or: Evolution of a Driveway

So, I had a couple of bigger projects planned for the summer. Not of a crafty nature per se, but definitely diy projects. The first, we have talked about since our remodel 5 years ago. We know that sometime in the future, the original front side of our home will get bumped out approx 3ft., which would take out that part of the patio and knowing we want to replace it, that in turn would take out a chunk of the "wild" garden. So, we had planned to expand the garden to cover for that and then some, using up a lot of what used to be our driveway before the remodel, and using the gravel that was already there for a pathway. Last summer, we started inching the rocks forward, tried to get Middle Monkey to do it for pay, but all in all, a half-hearted effort with little result.
This summer, I decided, it was going to get done before I head back to work in the Fall.
My thinking, was to spend the hours I wasn't getting paid to work over the summer doing something that otherwise: a) wouldn't get done or b) we would have to pay someone to finish.
We came into some free dirt (good stuff!) on my birthday, hubby took a mattix to the hardened ground/asphalt leftovers, Middle Monkey and I removed large rocks & raked off a lot of the gravel left behind. Then, I went through and turned it all over again, re-raked, then shoveled over the new dirt, added some half off pony-packs annunal/perennials at my favorite hardware store, and transplanted some of the plants that would eventually be moved (count 6 lavender plants), and a few other herbs from the garden.
I was pretty sore the next day, but so glad to have this done. I cannot wait for the plants to grow and let this new space get a little wild itself. We have a ton of ferns that need to be thinned, so a couple of those will get moved to the new area come fall, along with some lillies that were missed when I moved them earlier this year, and I'm sure I'll find something else to add in.
Here are some way before pics:
Just before the driveway was demoed 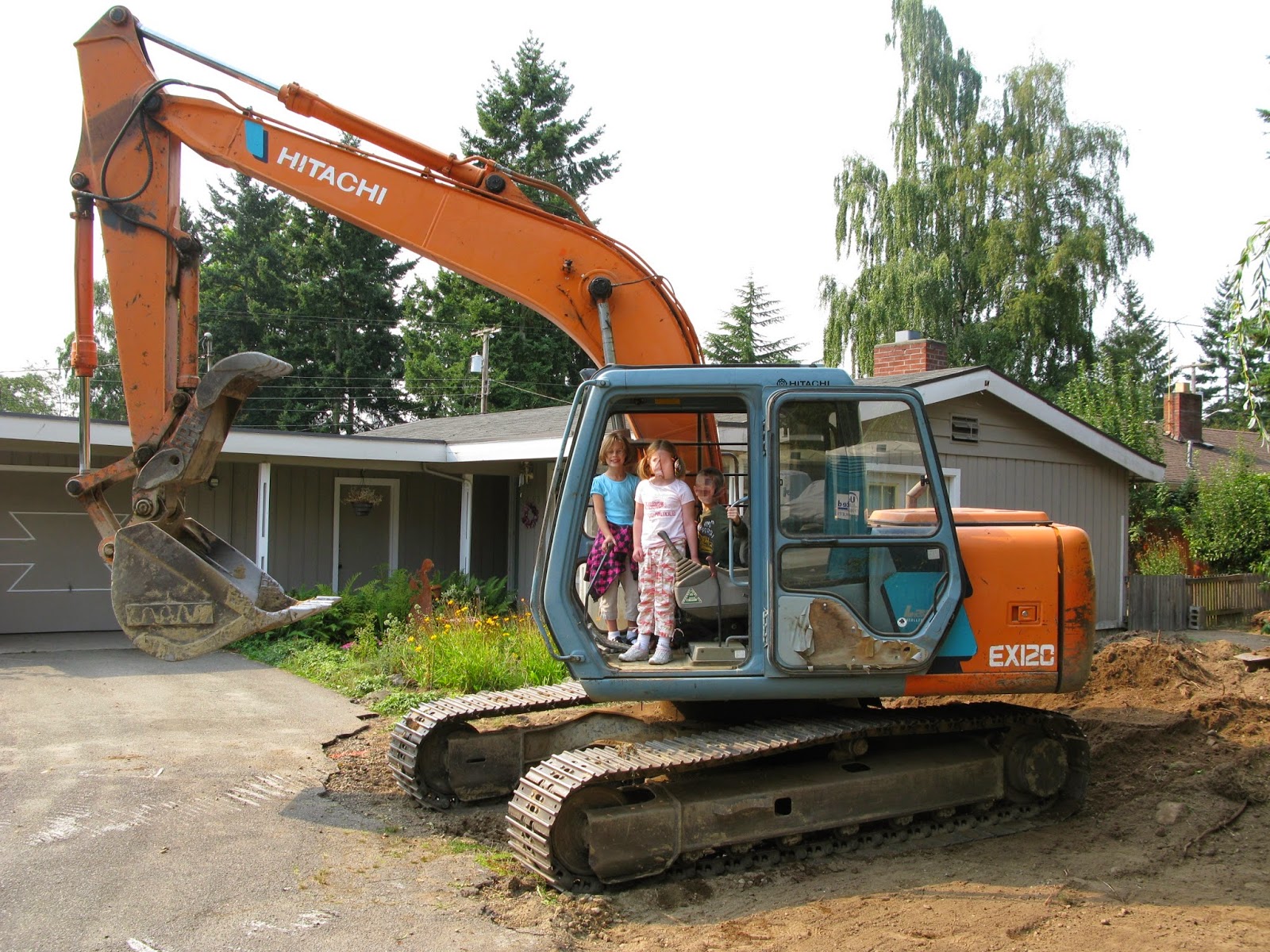 What was left, and the space cleared for the new driveway. 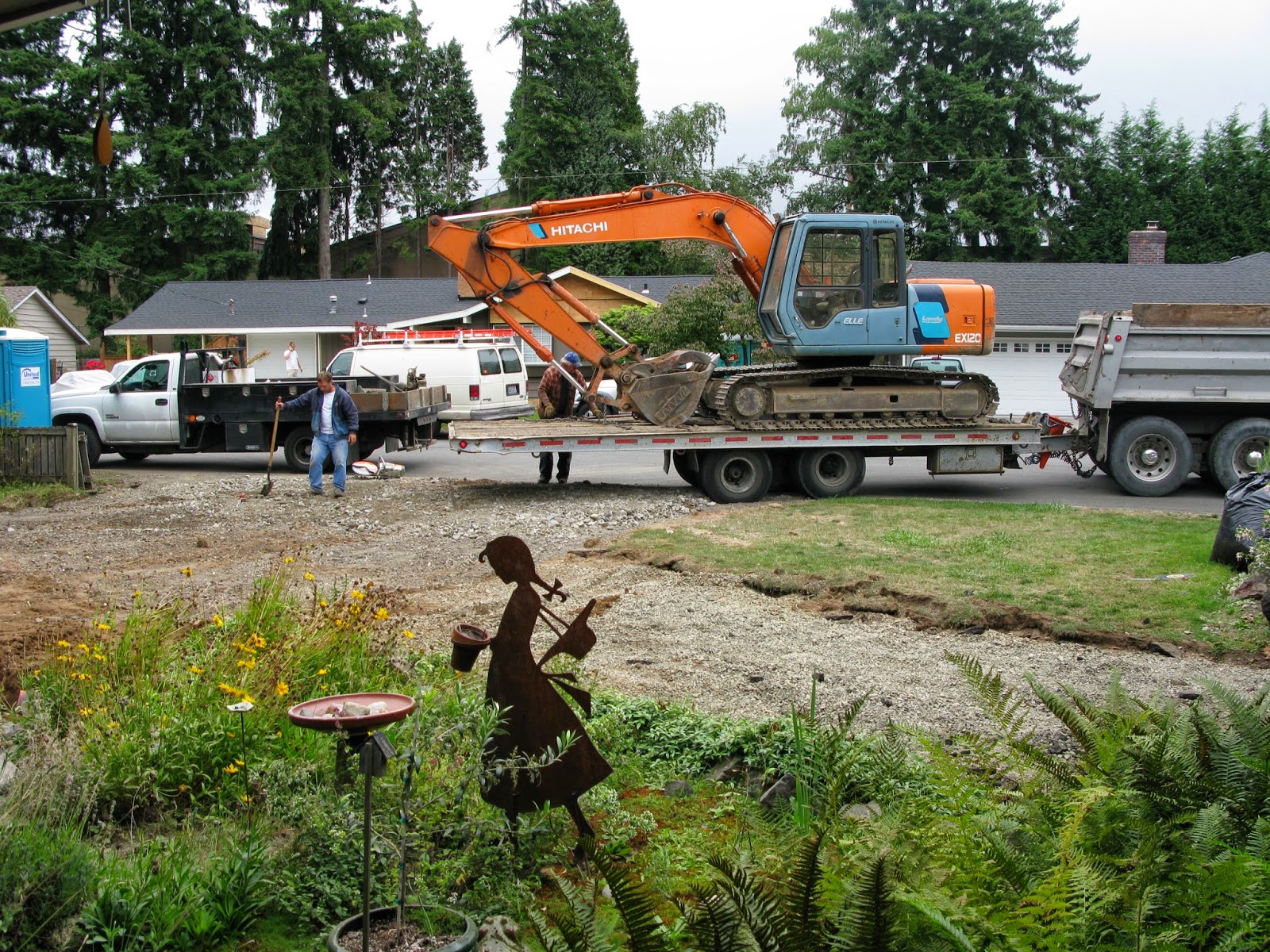 Jump ahead 5 years, we lined one side of the driveway w/lavender and I repositioned my lillies from the backyard to between said lavender.
Here is just before the "after" (I'd already cleared it and started spreading dirt): 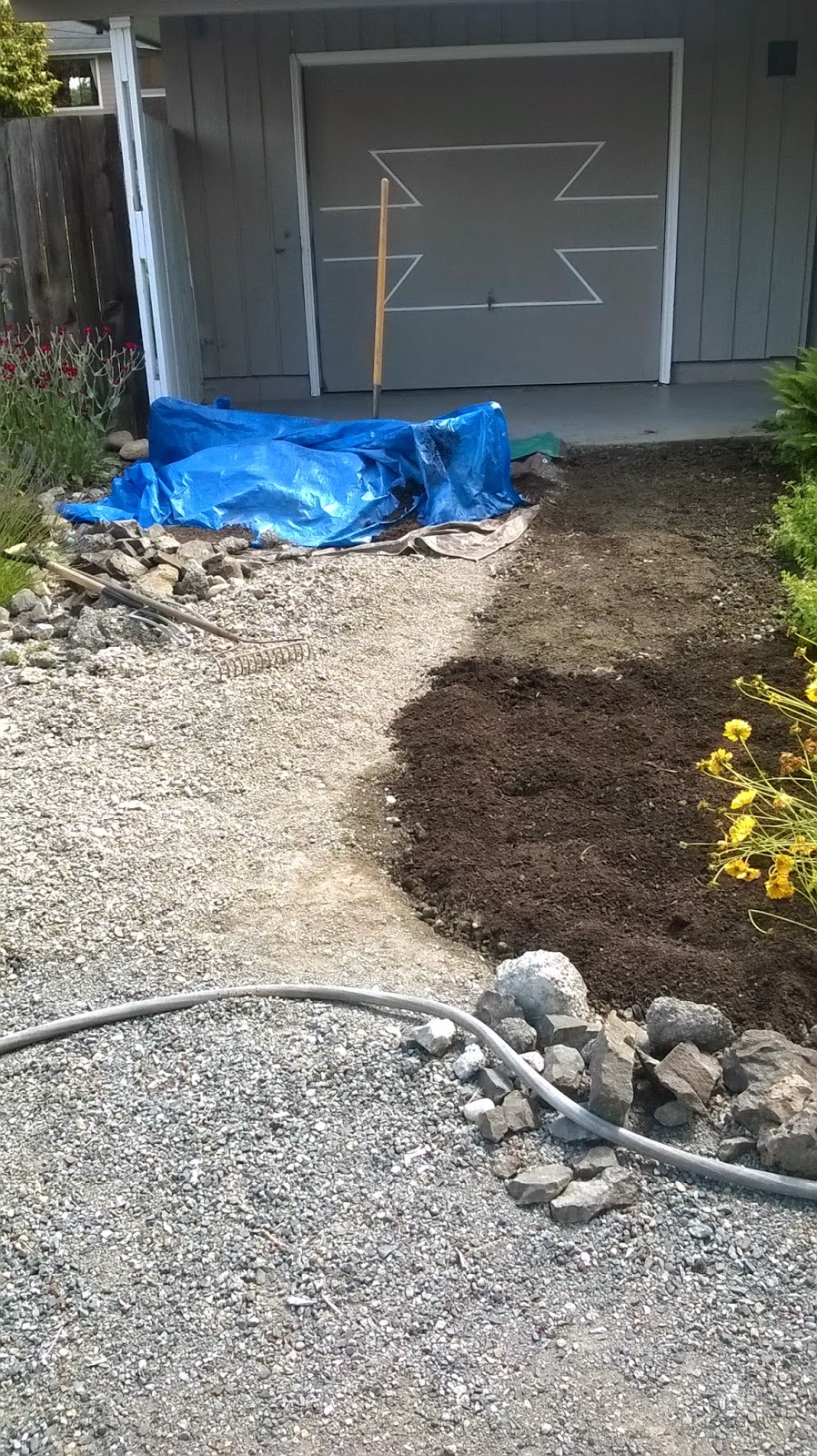 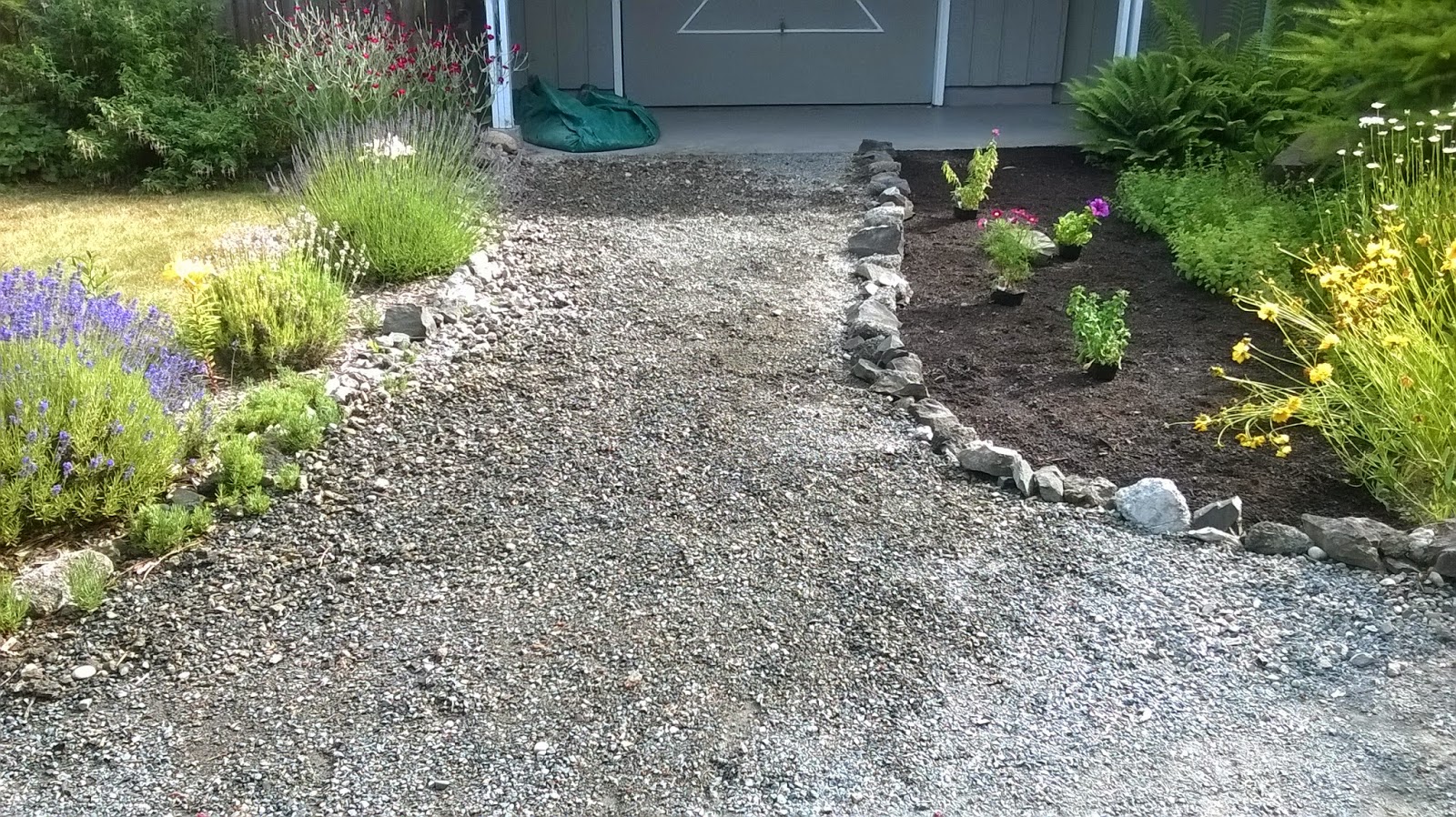 Everything planted, and Middle Monkey's innovative placement of a salmon shaped paver -he thought it should look like it was jumping through the stream. Frankly, it made me wish we had a couple more of those guys. 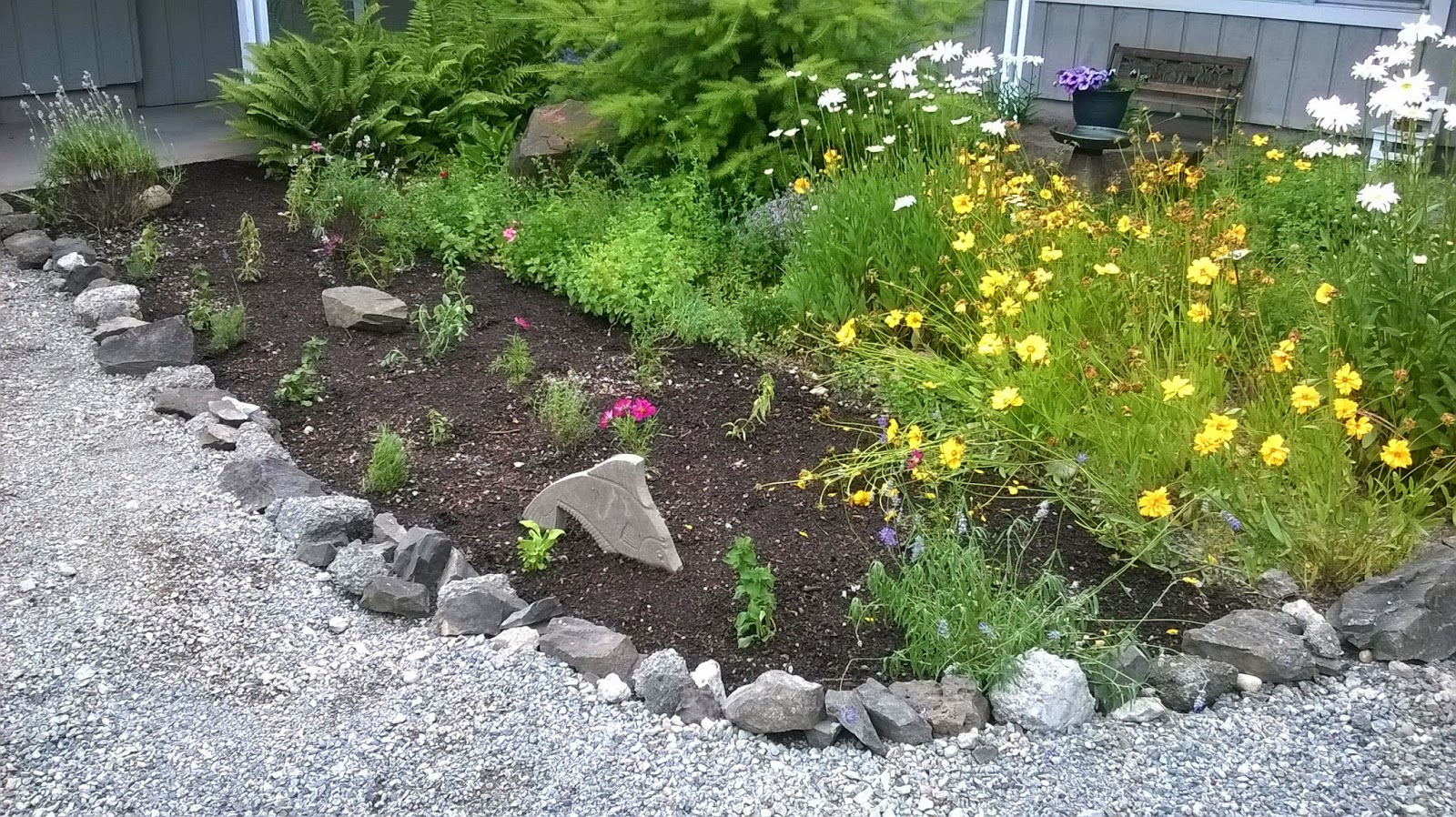